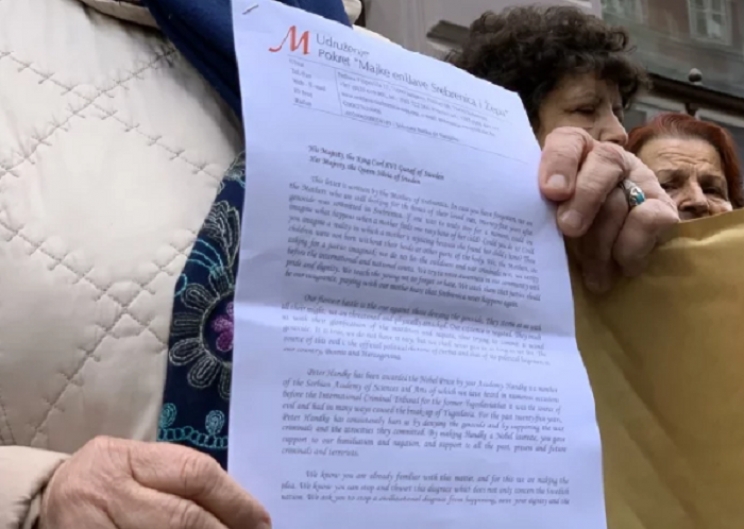 This letter is written by the Mothers of Srebrenica. In case you have forgotten, we are the Mothers who are still looking for the bones of their loved ones, twenty-five years after genocide was committed in Srebrenica. If one was to truly stop for a moment, could one imagine what happens when a mother finds one tiny bone of her child? Could you do it? Could you imagine a reality in which a mother is rejoicing because she found her child’s bone? Those children were not born without their heads or other parts of the body. We, the Mothers, are asking for a justice imagined; we do not let the evildoers and war criminals rest; we testify before the international and national courts. We try to raise awareness in our community with pride and dignity. We teach the young not to forget or hate. We teach them that justice should be our vengeance, praying with our mother tears that Srebrenica never happens again.

Our fiercest battle is the one against those denying the genocide. They storm at us with all their might; we are threatened and physically attacked. Our existence is negated. They insult us with their glorification of the murderers and rapists, thus trying to commit a second genocide. It is true, we do not have it easy, but we shall never give in as long as we live. The source of this evil is the official political rhetoric of Serbia and that of its political liege men in our country, Bosnia and Herzegovina.

Peter Handke has been awarded the Nobel Prize by your Academy. Handke is a member of the Serbian Academy of Sciences and Arts of which we have heard in numerous occasions before the International Criminal Tribunal for the former Yugoslaviathat it was the source of evil and had in many ways caused the break-up of Yugoslavia. For the past twenty-five years, Peter Handke has consistently hurt us by denying the genocide and by supporting the war criminals and the atrocities they committed. By making Handke a Nobel laureate, you gave support to our humiliation and negation, and support to all the past, present and future criminals and terrorists.

We know you are already familiar with this matter, and for this we are making the plea. We know you can stop and thwart this disgrace which does not only concern the Swedish nation. We ask you to stop a civilizational disgrace from happening, save your dignity and the dignity of Your people by not awarding Peter Handke a Nobel Prize. By doing this, you will be remembered as heroes of national and world history. Otherwise, you will be remembered as the accomplices in a civilizational denial of the Srebrenica genocide. Be brave. We especially ask for the audaciousness of a mother, the Queen Silvia Renate Sommerlath. Dear Queen, support and defend our plea, defend Yourself, Your family, protect Your children, Your country, and Your civilization. By doing so, You will defend the ideals and beliefs You fight for, and we have faith that You were taught to do so. We decide to believe in You. We invite the Sweden’s royal couple to attend the 25th anniversary of Srebrenica genocide in July, 2020, when the civilized world will honor over 8500 innocently murdered victims. It will be the greatest gathering against the ideas of the world war criminals and genocide deniers of the 21st century. This is the first invitation we have sent out. We ask You to be a part of it and come to the anniversary gathering. We are expecting You. We also invite the Queen to pay us a visit at any time. Our heart stays wide open for every mother, for everybody who has at least a grain of understanding for what we have been through.

If the Nobel Prize is awarded, regardless of everything said, to one of the greatest genocide deniers, and if our invitation is turned down, we would have to conclude that the Royal Family supports the decision of the Swedish Academy which opted for a laureate who is a successor of the Nazi and fascist ideas. This “award” has made us think of putting a pillar of shame in Srebrenica for the first time. This pillar would be a reprimand that there are individuals and organizations which directly or indirectly support other individuals and organizations in the act of genocide. If the “award” is not halted, the pillar will be a public reprimand for the members of the Royal Swedish Academy of Sciences and those who have suggested and supported Peter Handke as one of the greatest deniers of all the crimes and atrocities committed on the territory of the former Yugoslavia.

We do believe that you are to understand us and that you will do whatever is in your capacity to halt this heinous act of support to the wrongdoers and fascist.

To the esteemed royal family, wholeheartedly we express wish to preserve long tradition of noble reign, good health and we pray for providence from Almighty so that you can support our case as well.